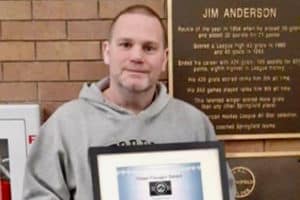 Aaron has been a volunteer for CHD Disability Resources’ Sled Hockey program for nine years. With the program, Aaron has helped coach the team and has been a dedicated “pusher” for players, helping to ensure that this adaptive ice sport creates an opportunity for people of all abilities to enjoy hockey.

While similar to “stand-up hockey” in terms of concept and rules, sled hockey players sit within an adaptive device—the sled—which is affixed to two skate blades and a runner, and use shortened sticks with attached blades on one end to help them propel across the ice. Some players also use a pusher, like Aaron, to push their sled throughout gameplay.

Earlier this spring, CHD’s Disability Resources program nominated Aaron for a CHD Game Changer award for the impact he has made and continues to make with his long-time dedication to the sled hockey program. When he was honored, Aaron was able to take a photo next to a plaque dedicated to local AHL hockey legend Jimmy Anderson, who served not only as a renowned player and coach, but as a dedicated member of the community, holding sessions to teach young children how to ice skate at Amelia Park in Westfield, MA two days a week until his passing in 2013.

“As humbled as I am being recognized for what I see as me simply trying to be a decent person, having my picture taken with it next to Mr. Anderson’s plaque is special to me,” Aaron said. “He was an amazing hockey player who gave back to the sport and his community until he was physically unable to. That’s the example I plan on following.”